Petition to Save the Morseland Building 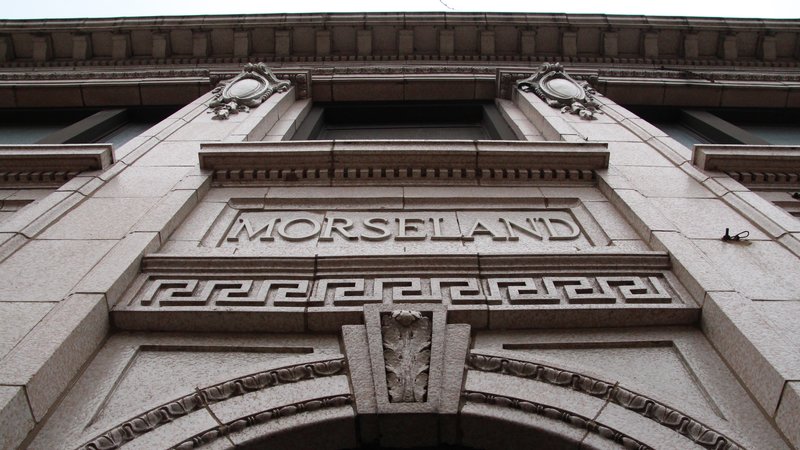 The Morseland Building sits at 1218 and 1220 West Morse Avenue in the Rogers Park neighborhood in Chicago, Illinois. The building was designed by B. Leo Steif & Co., Architects and built in 1924 with a two story all glazed terra cotta facade. Built in typical neighborhood style, the first floor contained retail units, with apartments upstairs. Most recently, the Morseland Cafe occupied the ground floor, while Pilates Chicago occupied the second floor.

According to a sales flyer published by the Northwestern Terra Cotta Company about their work on the Moreseland Building: "Store and Office Building for A. Branower, Morse Ave., near Sheridan Road, Chicago, Illinois; B. Leo Steif & Co., Architects.

Northwestern mottled glazed terra cotta of a tan shade with base course of dark gray granite finish was used for facing the front and return of this building. More the two-tone effect on the ornamental features.

Terra cotta is the logical material for buildings of this character where an attractive appearance must be combined with economy of construction."
On March 11, 2016, a Chicago neighborhood news website published an article entitled "Embattled Morseland Bar Will Soon Be Demolished, Alderman Says" with a photo showing demolition equipment on site. This is just the latest chapter in the recent troubled history of the building, but the issues are much more minor than they sound. The Morseland Bar's operating license expired in October 2012, but the bar continued operating after the expiration. That resulted in tickets from the Chicago Police and ultimately closure by the City. Liens had been placed on the bar in 2011 for $100,000 in unpaid taxes, mostly to the state, but also $1,100 to the City. Also in 2011, Northbrook Bank and Trust Company filed for foreclosure of the building. Millennium Properties placed the foreclosed property on the market for $625,000 in May, 2013. Almost a year later, the building was sold for either $490,000, $504,000 or $605,500, depending on which source is to be believed. At that point, the City of Chicago issued permits to "to "remove kitchen and all piping" and "replace 110 sheets of drywall". The building was sold again on January 14, 2016, this time for $700,000. The most troubling news was part of the March 11th story where the local 49th Ward Alderman Joe Moore is quoted as saying the Morseland building "will be torn down because it had become too costly for the owner to get up to code." That seems to be at least a little contradictory based on previous permits and statements about bringing and keeping the building up to code, and also with the high price tag for the building, just to tear it down. The building has not received any citations of structural or building condition. The previous citations were for lack or trash removal from the premises. The building is fully secured, and with all windows intact and thus no need for any plywood boarding up.

We cannot, and should not, sit idly by while a treasure of Rogers Park gets demolished to be turned into another empty, gravel lot. Morse Avenue has embraced a resurgence in recent years with most notably, the restoration and reopening of the Morse Theatre, now named Mayne Stage. The $4 million streetscape project performed by the Chicago Department of Transportation helped brighten the street, soften the area with planters, and enhance the pedestrian flow via new and wider sidewalks along Morse. New residential developments include 1334, 1412-1414, 1448, and Reside on Morse. Lastly, the CTA embarked on a 6-week major overhaul of the Morse CTA Red Line station. The rehab involved everything from new floors, walls, stairs, lights, doors, really everything, save for the addition of an elevator. That and wider platforms will be coming in the next decade or so as part of the CTA's Red Ahead initiative to rebuild the Red and Purple lines from Belmont north to Howard.