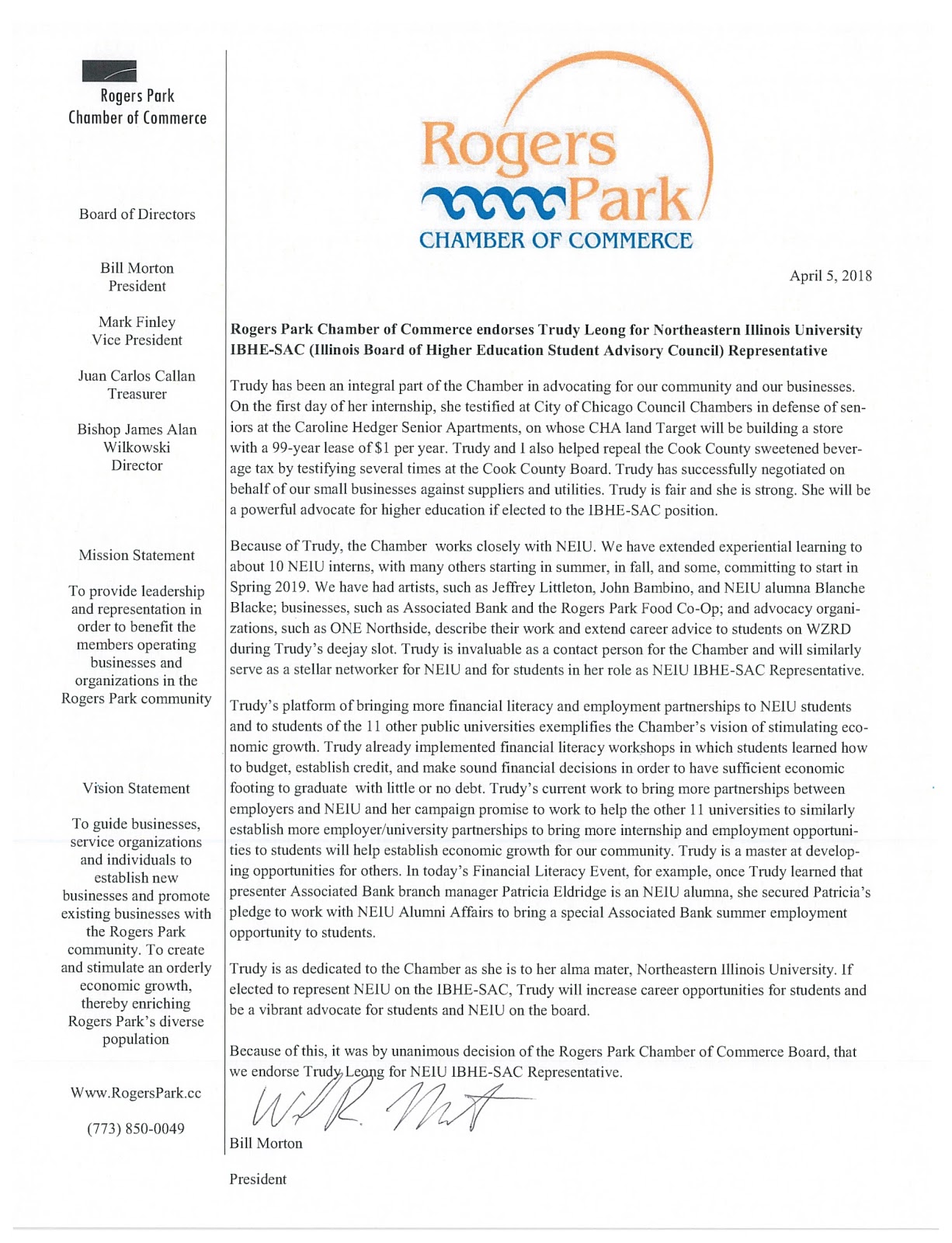 Trudy has been an integral part of the Chamber in advocating for our community and our businesses. On the first day of her internship, she testified at City of Chicago Council Chambers in defense of seniors at the Caroline Hedger Apartments Building​ Senior Apartments, on whose Chicago Housing Authority​ land Target will be building a store with a 99-year lease of $1 per year. Trudy and I also helped repeal the Cook County Government​ sweetened beverage tax by testifying several times at the Cook County Board. Trudy has successfully negotiated on behalf of our small businesses against suppliers and utilities. Trudy is fair and she is strong. She will be a powerful advocate for higher education if elected to the IBHE-SAC position.

Because of Trudy, the Chamber works closely with NEIU. We have extended experiential learning to about 10 NEIU interns, with many others starting in summer, in fall, and some, committing to start in Spring 2019. We have had artists, such as Jeffrey Littleton, John Bambino, and NEIU alumna Blanche Blacke; businesses, such as Associated Bank​ and the Rogers Park Food Co-op​; and advocacy organizations, such as ONE Northside, describe their work and extend career advice to students on WZRD Chicago 88.3 FM​ during Trudy’s deejay slot. Trudy is invaluable as a contact person for the Chamber and will similarly serve as a stellar networker for NEIU and for students in her role as NEIU IBHE-SAC Representative.

Trudy’s platform of bringing more financial literacy and employment partnerships to NEIU students and to students of the 11 other public universities exemplifies the Chamber’s vision of stimulating economic growth. Trudy already implemented financial literacy workshops in which students learned how to budget, establish credit, and make sound financial decisions in order to have sufficient economic footing to graduate with little or no debt. Trudy’s current work to bring more partnerships between employers and NEIU and her campaign promise to work to help the other 11 universities to similarly establish more employer/university partnerships to bring more internship and employment opportunities to students will help establish economic growth for our community. Trudy is a master at developing opportunities for others. In today’s Financial Literacy​ event, for example, once Trudy learned that presenter Associated Bank branch manager Patricia Eldridge is an NEIU alumna, she secured Patricia’s pledge to work with Northeastern Illinois University Alumni Association​ to bring a special Associated Bank summer employment opportunity to students.